All posts tagged with clapton sda 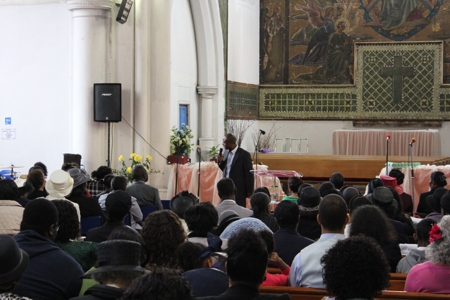 If you had to choose between rescuing your son who had fallen down a shaft and rescuing a speeding train with hundreds of people aboard hurtling to their certain death, which would you choose? If in the course of rescuing the train, the train would crush your son to death in the shaft, would your answer be different? See one man’s choice here. This was the emotive question that was posed at the end of a powerful and thought provoking fortnight of meetings with Evangelist Roger Duncan from Trinidad and Tobago.

Members of Clapton Community and Woodford Green churches hosted the campaign at Clapton church from Sabbath September 6th to 20th. The extremely popular evangelist, known for his passionate in depth clever delivery, personal testimony and clarion call to action, nightly challenged his listeners to put aside their differences between one another in order to finish the work. Evangelist Roger Duncan also instructed those who could to join him in a ten day watermelon fast to facilitate earnest prayer, clarity of the mind and reception of the Holy Spirit.

Roger’s knowledge and explanation of the Word was profound using Hebrew translations, present day analogies, personal experience and church practice. Loud Amens, echoes of laughter, nods of confirmations, and rapturous applause were often the results of his proofs and crescendos. News spread of his campaign and members with their visitors as far afield as Willesden, Hampstead, Tottenham, Edmonton Central and Lighthouse churches came to pack out the Clapton sanctuary filling the newly acquired pews leaving standing room only. Guest singers arranged to surprise Roger with a special meditational and nightly prayer was requested by members touched by the messages.

At the end of the fortnight, moving testimonies were given of both the positive effects of the watermelon fast and the impact of putting Matthew 18 into practice. One member testified of his reconciling with an estranged family member over more than a decade long dispute. The release from his burden and freedom he gained was unimaginable, encouraging others to do the same.

It comes as no surprise then that the waters were troubled at the end of the campaign when three people decided to give their lives to Jesus and were baptised at Clapton supported by their friends and family then welcomed into the fellowship, with others declaring that they wish to follow suit soon.

As Roger Duncan prepares to leave these shores, we are left blessed, changed by his campaign through the Holy Spirit and moved into action to bring on the soon coming of the Lord.

If you would like CDs of Roger's 14 day series, they are available from Clapton Church Technical Team. Please send an email to claptoncommunications@hotmail.co.uk