Cycle Ride from London to Paris 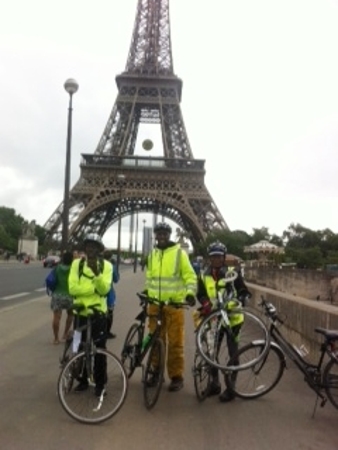 Call them brave, call them crazy or call them led but on the Wednesday 28th May 2014 they were called blessed when four cyclists arrived at the Eiffel Tower in Paris after leaving Tower Bridge London four days earlier.

"It's overwhelming to arrive at La Tour Eiffel!" Remarked Angela remembering the challenges of the previous days and months leading up to the ride. "Can you believe it? We've actually done it!"

The moment was recorded by photos and videos using various mobile devices. Hugs and handshakes were exchanged after which there were real showers of blessings as the rain poured down.

In aid of charity fundraising for the Clapton Community SDA Church building fund, Pastor Burnett said "Now that we've done the peddling, we are looking to sponsors to bring in the pounds."

When asked if he had anything more to add, Pastor Burnett cheekily suggested "Anyone for Land's End to John O'Groats?"

Sponsorship and donations can be made through our restoration page